People often ask us why we use the Aviakit logo as aninternal label in our jackets and what its significance is to Lewis Leathers asa company.

The answer lies in our association with flying clothing andkit in the first quarter of the 20th Century, looking at theearliest advertisements we have in the LL archive, it can be noted as early as1930 that the name AVIAKIT is used as the Telegram address as can be seen at the foot of the advertisement on the left.

At around the same time D Lewis Ltd produced woven labelswith the Aviakit brand name, the earliest type has the wording Shrunk BDA‘Rigmel’ below –which presumably means that they were first developed for theCivilian all-cotton Summer flying helmets featured in adverts of the time and werethen later used for the leather versions, D Lewis Ltd labels can also be seenin helmets from the same period. 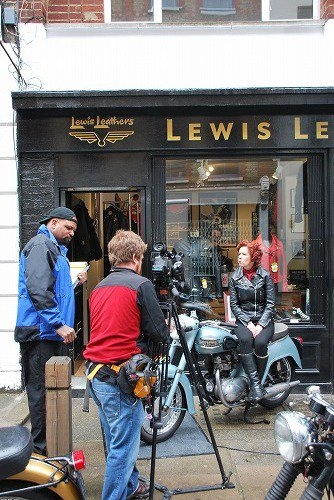 Late last month we had a visit from the Discovery Channel who are making a Documentary on the Cafe Racer Phenomenon which is now a growing scene Worldwide.

Mike Seate of US magazine Cafe Racer brought Director Ed and Scott from the Discovery Channel along with Blake motorcycle racer and reviewer, the team spent the whole day here and we were also joined by Marco and Roberto of Moto Special magazine of Italy, who were working on a feature of LL to be published later this month.

We were also joined by an intrepid group of riders on the vintage machines who made it despite the rain, in no special order thanks go out to: Shaun & Sue, Dave Carroll, John, Stuart, John, Boleslaw, Cres, Yasmin and Gavin!